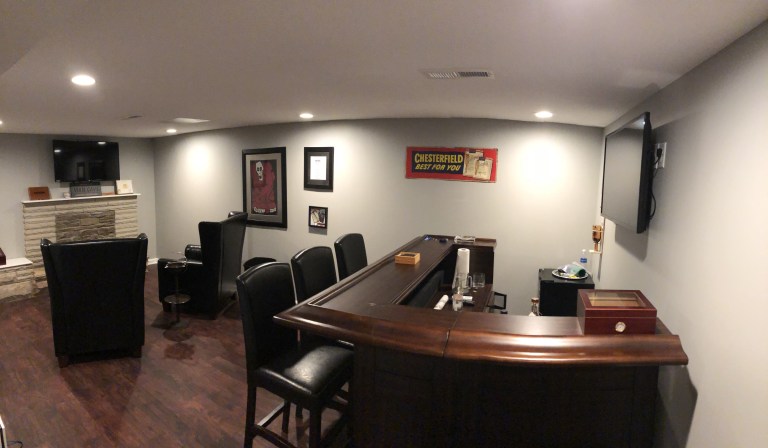 We recently completed a very interesting basement remodeling project. We were asked to design and build a cigar smoking room in a portion of the basement. It involved some great features like a hidden bookcase as entry door and extensive ventilation system.

As a cigar smoker myself, in an area of the country where winter seems to drag on forever, I can see the benefit to having a dedicated room to pursue this hobby. A fine handmade cigar can take an hour or longer to smoke. It is really hard to appreciate a nice cigar while shivering in your garage or sitting in your car with the heater blasting.

Entry into the room is disguised as a hallway bookcase. A simple push and the bookcase reveals the entry into the room. The bookcase/door is from Murphy Door (www.themurphydoor.com) and is assembled on site. The room itself is pretty simple; 210 sq.ft., all electrical work brought up to code, fully insulated, and a TV on each end of the rectangular room.

The not-so-simple part of the project is the ventilation system. It is recommended that the air in a smoking room should be changed out at least every 2minutes. To accomplish this, a simple bathroom fan won’t do. We used a high powered greenhouse fan to remove the smoky air, but that is only half of the equation. We also needed another fan to replace the air we were removing to avoid a negative pressure in the room (which may affect the gas burning appliances in the basement, possibly creating a CO danger). This second fan also needed to heat the air being brought in, since most likely the fan will be run during cold weather. Both fans are turned on with the same switch and the heater in the intake fan is operated with a thermostat so it won’t kick on if it’s not needed.

This was a great project and lots of fun to build. It is one of the smallest basement finishing projects we have done, but it is the one I am most envious of. Cheers to Dan (the homeowner) for asking us to do this build for him.